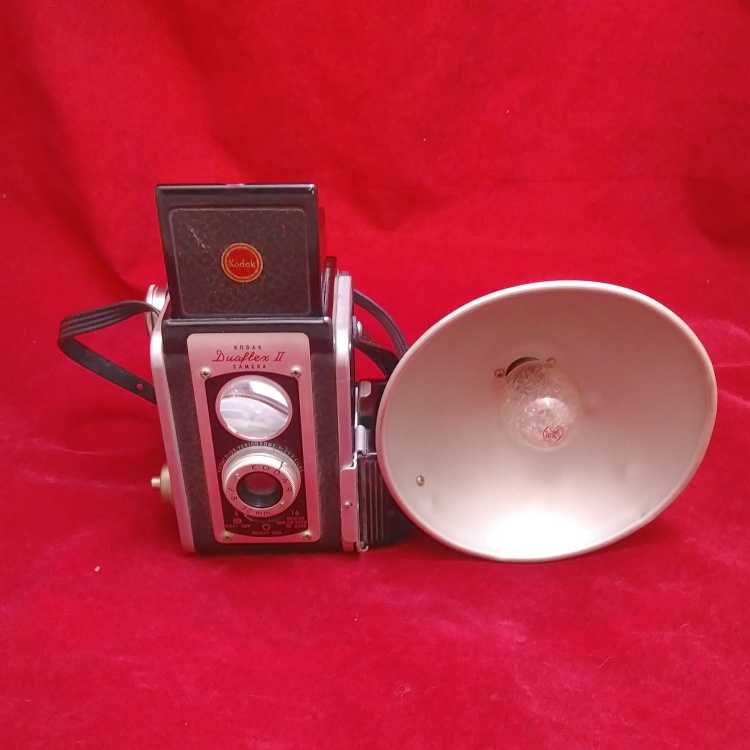 You should absolutely buy a Kodak Duaflex II with a variable focus Kodar lens. Here’s why:

Yeah so I broke it down, onto the specifics.

6×6 is a great format cause you can contact print it for wallet size photos and a 6×6 enlarger is way cheaper than other medium formats. Heck, most 35mm enlargers have a negative carrier for 6×6 or will work fine with a hand made cardboard carrier. Sure, it’s 6×6 with 620 rather than 120 but 620 spools are easy to find or you can sand down the ends of a 120 spool.

It’s a pretty compact camera. Smaller than a normal TLR and because of the form a bit more packable than a Holga or Diana. Yeah, it’s bulkier than a folder, like any of the million 6×6 rangefinder or viewfinder cameras, but it’s a fraction of the weight. It’s around the size of a coffee mug.

It’s a thick plastic and metal camera. I bet every one out there has been knocked around and dropped a dozen or more times. Don’t go out of your way to beat it up but in the normal run of things the cameras just don’t break and they are almost too simple to fail and need work. This is a toss in a bag, chuck in the glove box camera.

It’s a Kodak, with a Kodak lens. It’s not an award winner but it works and isn’t trash. Some people call it a toy camera, it’s not a pro camera by any means but every family reunion in the 50’s probably had one of these around. If you get one of the variable focus models it’s got some different apertures too. You have some flexibility there and it won’t ever be too confusing. You can pretty much get some kind of negative every time.

Unlike most other cameras in it’s class, basically box cameras, the variable focus models (and all the models above II) have double exposure prevention. If you don’t wind it, no clicky clicky, unless you specifically press the override. This is a great feature for forgetful people or anyone used to 35mm or any fancier cameras. And it’s not some fidley how to circumvent double exposure protection, it’s a little lever, it was designed that way.

The flash units aren’t hard to find, and unlike later models that used a gun style flash that worked with a variety of Kodak cameras the flash was specifically for the Duaflex. Even with the flash attached it’s still decently compact. Not only that but the reflector is actual metal. Most of the later gun style ones used a plastic reflector that just doesn’t stand up to abuse the way a metal one does.

The waist level finder is a thing of beauty. This is the LCD display of yesteryear. The one on the Duaflex is a lens rather than a ground glass so as long as your lined up it works in low light about as well as in normal light. The simple single-element lens in front of it means it’s bright bright bright. If you want ground glass instead, because of how the cameras made you can replace it with a ground glass easily.

Kodak was always good about putting a tripod socket on their cameras and the Duaflex is no exception. Some people never seem to use a tripod but it’s always better to have a socket than not. With that and the B shutter setting you got night work and indoor photography covered.

This is not a costly camera. You’re looking at $5-15 for this, max. Even on a site like eBay the thing is going cheap. I picked one up with a flash and the nearly impossible to find Kodak No.6A close up (portrait) attachment, and the original manuals for the flash everything, for all of $10. This camera is always available and always in working order.